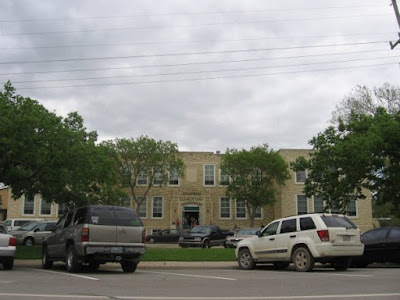 Chapman was my and my family's hometown from 1990 until June 2006. We moved to Lindsborg at that time, but our house remains unsold to this day. When I return this August, I will take numerous snapshots and list it on Craigslist for $75,000.

I called back home (only ~52¢/minute after 8 PM local time) and asked how our old house was. Natasha said her friend checked out our old house, called her, and told her that it's fine; just a few broken windows. 70-80% of the town was destroyed. Fortunately for us, our house was located in the remaining 20-30%.

Manhattan is where my home university is. Several buildings there were damaged-

- Ward Hall, the building which houses the nuclear reactor, was also damaged. However, the reactor housing remains intact and in "safe mode." (Yes, we DO have our own fission reactor. GO CATS!)

Fortunately, my Sanders apartment building has been spared. (Confirmed after calling my landlady.)

All tornadoes were far from my homes, until now.

But I'm more than just lucky! Everything that's mine and my family's keeps being spared!

For all my life, no tornado ever hit MY neck of the woods, so why now??? Heh, at least I'm still lucky despite all this. My family lives 12-16 miles south of where another smaller tornado also struck, (Salina, that is) so let us hope another doesn't form closer to home. And as it goes without saying, I'm over 5,000 miles from there right now.

Moreover, the tornadoes caused a lot of damage to all of the schools I have ever attended (including parts of K-State,) but none of my homes (save for a few broken windows back in Chapman.) Weird, but lucky at the same time. What's also weird was that the tornadoes hit not just one, but TWO of my hometowns on the same night. (Chapman being the former one, of course.) Thank God our homes were still spared despite this seeming double-stroke of bad luck.

Did I know the woman who died??

On one of the videos, an anchor says a 21-year-old woman was found dead in a yard in Chapman. That means it is very likely she went to my school! I probably knew her pretty well. If that is so, then I'll soon receive invites to join a memorial group for her here on Facebook.

I'll be sure to tour the damages when I get back home in August. In the meantime, here are some links and pictures of what I saw on the news so far.

However, in the numerous pictures of tornado-damaged Chapman, I have yet to find pictures of OUR old house. Maybe they'll only take pictures of damaged homes and their foundational remains (if simply gone.) They'll unlikely be interested in taking pictures of undamaged houses, so that would be a good sign for me and my family, now wouldn't it?

Article of damage in Chapman. Images and videos galore. (Let us hope this link never expires.)

Tornadoes rip Manhattan, KSU damage more than $20 million (Video there, and you may figure out where to find images.) 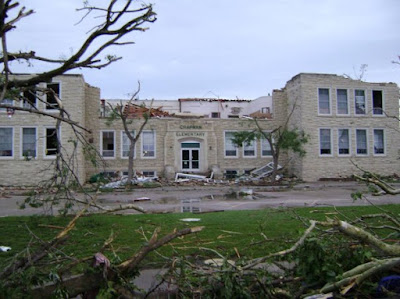 Image Caption: (Before-&-After: After) Now I get to see the two 2nd Grade classrooms for the first time in many years. (As you can see, they are EXPOSED on the 2nd floor.) I wonder whether they can repair all of the schools by August in time for the new school year?
Posted by ENG at 12:59:00 PM