What does it Justice: My lighthouse shines a rainbow in 長崎... (Personal entry) 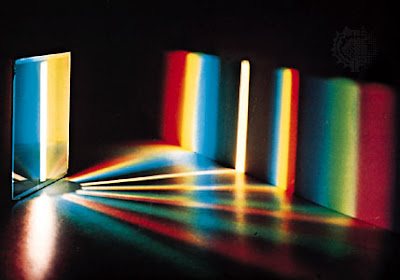 Image caption: A lighthouse of the future could shine a lot like this. I am a fan of the future. Garrett said the way I talk was grating (and has been the only one to say so thus far.) This image depicts "diffraction grating" and by golly, that is とても きれい。 Yes, -very- beautiful.

(Garrett, you may place your input if you'd like.)

More than just a sore thumb

I get the feeling that "sore thumb" doesn't do it justice; try a lighthouse that shines a rainbow instead of the traditional white light. That lighthouse will stick out in the greatest ways known to man.

Be yourself but find yourself

At first, I thought the advice to "be yourself" didn't apply here because I was sticking out more than I did back home. I should still be myself, but someone (Garrett or Kelcey) told me I may need to "find" myself.

Garrett told me to find a serene park (either the Peace Park or another aesthetically pleasing place closer to my host family's home. Once there, I must introspect & meditate. (Praying, perhaps, is one way to.) Moreover, also find some bread at a コンビニ (a local convenience store) and feed pigeons. I have no problem not looking threatening so I can attract the pigeons and feel accepted for the moment. No, not pet because the birds keep their distance from bigger creatures like us.

As if my social skills jumped back a few years

Soon after I came here, I learned several people are more blunt (direct, up-front) than I am used to. They have shorter patience than many people I know back at K-State. Subconsciously, I avoided blunt people and kept with anyone with more tact (mostly Christians and some others of other beliefs.) (Don't get offended by the preceding sentence, please.) So for a while, I thought my social skills was at or close to par. Then here it suddenly seemed like my social skills jumped backed to where I was several years earlier!

It turned out I was in the "comfort zone" for a long time, associating and nurturing friendships with Christians and anyone with an overly friendly disposition. Not being around blunt people often enough made me not learn how to intermingle with them well enough. Now that I'm of a minority disposition (and religion) here, I must adapt and learn to interact with anyone I would've had the option not to interact with before.

Before college, there were unkind people too and I was happy to get into the more comfortable zone that was K-State when I started there. Being happy where I was, I never considered leaving it, and I have now, at least for the semester. I had subconsciously assumed many (or all?) colleges would offer the same kind of comfort zone, including Nagasaki's. It appears I was only thinking mostly of the Japanese students. I guess some liberal colleges might not, and many of the JASIN students here are from liberal colleges. I read somewhere that K-State was a more conservative kind of college.

Some social hardships back home

Talking as if I was Captain Kirk's grandson!

Some of what Garrett pointed out was that I talk like William Shatner in some comedy skit show that I can't recall right now. I halt in the middle of a sentence in order to make sure I'm using the right word and think about whether that word or sentence will rub someone the right way or not. Even though these pauses are for only 1/2 to 1 1/2 seconds, they still feel too long for these people. Garrett says this shows a "lack of confidence."

(Many) K-Staters have an abundance of positive たてまえ

No one at K-State told me this??? The K-Staters had to have had much greater positive "tatemae" (outward show of feelings, as opposed to "honne," how someone truly feels inside.) If I have any reason to believe I could fail, and that it's easy to fail, I subconsciously put up safeguards to ensure failure is less likely to happen but according to Garrett, these failures are more likely to happen and happen faster just because these "safeguards" are simply up there in the first place.

"Safeguards" that don't make me safe

This habit reached the subconscious and I believe once I do something without even thinking about it (like halt in the middle of sentences to figure out the best words to say next), it's hard to get rid of. Garrett said "it's grating to the ears" but most of the time, no one will say a thing about it; they'll try to finish a conversation and get out of there as fast as they can. He's "waking me up" in these senses.

More social forgiveness among the Japanese

Now to socialize amongst the Japanese is what I hypothesize will be more lenient and forgivable in the following ways- if I halt mid-sentence in Japanese, they won't think I lack confidence; they'll know I'm a foreigner and am still learning my Japanese, so they'll permit it without even a second thought! Now you see one of the reasons I left America? I have the potential to fit in more (the way I am now, at least.)

At least the Japanese students don't notice anything unusual about me, so far, and as far as I know... If I'm wrong, spill some details about it.

Plan to live outside the US

I've been meaning to leave the US for the last time soon after graduating college, and live somewhere in the East Asia area (either here, Korea, or China.) Just being American and having American quirks, qualities, and traits may make me somebody significant there/here. Even quirks that only a few other Americans share might not be something that many will mind in the region. (Family and friends back home: No need to worry! I'll visit you on vacation every once in a while.)

I'm sure I had more, but I must get to bed. Being sleepy does interrupt my thought path so I can't think of what to put next as effectively as when I'm wide awake. Whatever else I wanted to give here, I'll give on a future note. So long for now.

(I was going to include it here but the content got too long; long enough to become another new note. The new note is "Addendum from "What Does It Justice:" Endnote on Bluntness" and you should see it right above this one.)
Posted by ENG at 10:48:00 AM